Rising protests in the sports world 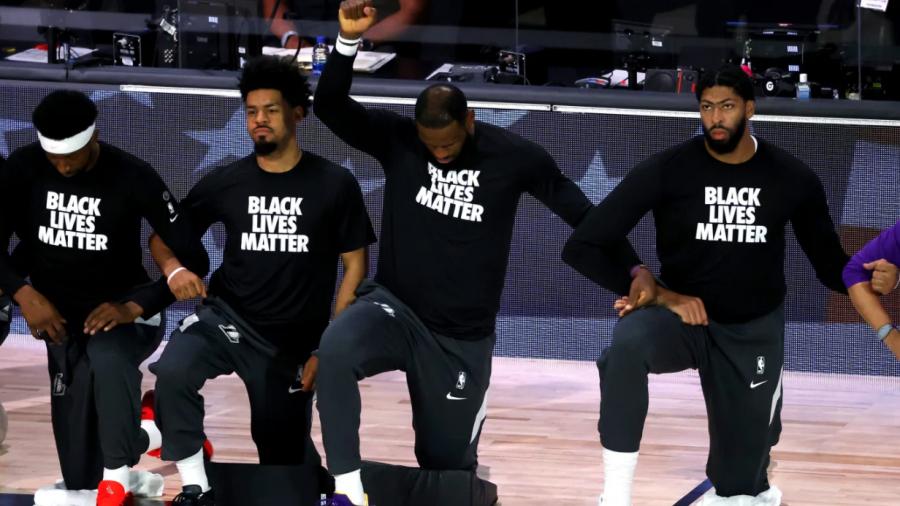 A famous saying in our society is that “a picture is worth a thousand words.” This year, however, athletes from across the sports world painted a picture worth even more: a picture filled with silence.

On August 23rd, Jacob Blake, a Black man in Kenosha, Wisconsin, was shot in the back several times by police officers while walking towards his car. This tragedy immediately sparked an outcry from many of America’s influential Black athletes, including Lebron James and many of his National Basketball Association counterparts. “We are scared as Black people in America,” James said during a news conference inside the NBA’s Disney World bubble, “because you don’t know, you have no idea how the cop that day left the house.”  The shooting of Jacob Blake was seen as yet another instance of what these athletes believe to be racially motivated violence and police brutality.

The NBA shook the sports world a few days after Blake’s shooting when the Milwaukee Bucks, a team that plays 40 miles from Kenosha, boycotted their first-round playoff game against the Orlando Magic by not coming out of the locker room. Sterling Brown, a forward for the Bucks, who was tased by the police in 2018 after a parking violation, read a statement as to why the Bucks, and many teams that followed suit, decided to boycott, “Despite the overwhelming plea for change there has been no action, so our focus today cannot be on basketball.’’

After the Bucks and Magic decided not to play, the rest of the NBA’s players, led in a meeting by Lebron James, decided to boycott the playoffs for a few days, while some players thought about canceling the rest of the season. Many players, including the Brooklyn Nets’ Kyrie Irving and Bucks’ George Hill, thought that the NBA bubble, which is an isolated zone in Florida to protect the players from COVID-19 while allowing the season to finish, should not have started in the first place, “We shouldn’t have come to this damn place to be honest,” Hill said, “I think coming here just took all the focal points off what the issues are.”

The NBA and the Women’s NBA are at the forefront of the continuous fight against incidents of police brutality against African Americans, but the boycott that began with the Bucks reached every sports league, even what some consider conservative Major League Baseball, where three games were canceled in response to the Blake shooting. WNBA players from the Washington Mystics came out to the court wearing white shirts with seven holes to represent the seven bullets that went into Jacob Blake’s back. Three MLB games featuring the Los Angeles Dodgers, San Francisco Giants, San Diego Padres, Seattle Mariners, Milwaukee Brewers, and Cincinnati Reds were postponed to show support, and 5 Major League Soccer games were also postponed. Naomi Osaka, the number three women’s tennis player in the world, decided not to play her match in the Western & Southern Open, saying, “Before I am an athlete, I am a Black woman. And as a Black woman I feel as though there are much more important matters at hand that need immediate action, rather than watching me play tennis.”

The loudest demand for change came from Doc Rivers, the Black coach of the Los Angeles Clippers, speaking after his team’s Game 5 victory over the Dallas Mavericks, “It’s amazing why we keeping loving this country, and this country does not love us back…All you hear is Donald Trump and all them talking about fear. We’re the ones getting killed. We’re the ones getting shot. We’re the ones that were denied to live in certain communities. We’ve been hung. We’ve been shot. And all you do is keep hearing about fear.”

Professional athletes have been at the forefront of speaking out against societal injustice for more than 50 years, with athletes like Tommie Smith and John Carlos raising their fists at the 1968 Mexico City Olympics, and Muhammad Ali refusing to serve in the Vietnam War, and most recently, Colin Kaepernick kneeling for the National Anthem to protest purportedly racialized police brutality. These examples laid the groundwork for the current boycotts which have affected America more in a few days than Kaepernick’s decision to kneel did in four years. Walkouts of this magnitude have never happened in the sports world before, and they are setting the bar high for future generations as black and white athletes continue to protest until their demands for the fair and equal treatment of Black Americans by the judicial system are met.

While these athletes have faced significant backlash, especially from President Trump during the Republican National Convention, the players are ignoring the backlash and say they are competing for something greater than winning a game.

Weiswerda, Brennin. “These NHL Players Have Spoken out about Racism and the Death of George Floyd.” RMNB, 5 June 2020, russianmachineneverbreaks.com/2020/05/30/these-nhl-players-have-spoken-out-about-racism-and-the-death-of-george-floyd/.