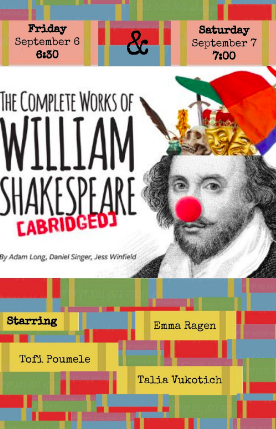 Performing The Complete Works of William Shakespeare [Abridged] with a cast of three and 97 minutes of dialogue is not an easy task. The play brings together 37 plays to form one cohesive whole while adding a unique plot that breaks the fourth wall and simultaneously relies on audience participation. The actresses, Tofi Poumele, Talia Vukotich, and Emma Ragen, developed a relationship and rapport that gave the show life and helped them improve and improvise on the spot.

The set for The Complete Works of William Shakespeare [Abridged] was simple and got the job done well. The play’s focus was, after all, on the actresses’ amazing feat of dramatic art. The set consisted of two drops which are detailed curtains made to look like columns that one may associate with the Elizabethan Era. The actresses brought on and off props and furniture as needed, each actress with specific instructions on where to enter and exit for any given moment. One of the most difficult parts of the show occurred backstage: the prop and costume changes were intricate and time-sensitive, as much of the comedy in the show relied on achieving perfect timing. Complete Works was a time-consuming commitment for everyone who worked on it, but the appreciation for Shakespeare’s work by the cast proves the lasting power of his works.

The show in itself is a testament to the legacy of Shakespeare’s works. The reason it has been successful for so many different theater companies is because of the interest that Shakespeare’s plays still manages to cultivate all these decades later. Mr. Peviech summarized it best: “The play is a distillation of what makes Shakespeare endure and also about the power of theatre to tell transcendent tales.”