The most striking series in baseball 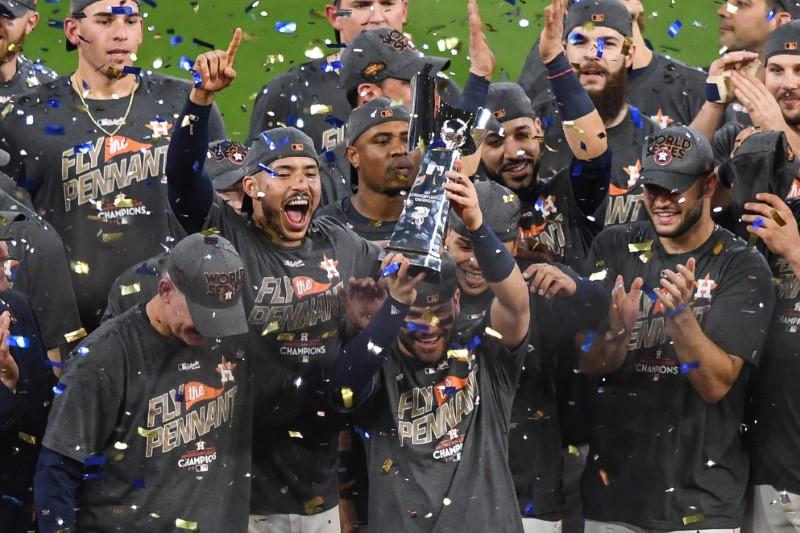 It was a 103 degrees in L.A. and Kershaw was on the mound pitching for the Dodgers. The Astros pitcher was Keuchel and throughout the entire game, the two were head to head in a pitching showdown. Kershaw gave up three hits while Keuchel gave up six. Keuchel did not play too well, but the Astros did not use many bullpen pitchers. The Astros’ offense did not have a great game after only scoring a single run. The Dodgers came out with a 3-1 win because Justin Turner hit a two-run home run, which put the Dodgers ahead. This game was a pretty dominant performance by the Dodgers and they proved they were the team to beat.

Game 2 was one of the best games of baseball that has ever been played, and this is why: it was Verlander, the best pitcher for the Astros in the postseason, versus George Hill, a great pitcher for the Dodgers. The Astros offense erupted in this game with fourteen hits to the Dodgers six hits. It was tied 3-3 and had to go into extra innings. In the tenth inning, both teams scored two runs so the game had to go another inning. At this point, I couldn’t stop watching. This game felt like it could have gone either way and I really didn’t know who was going to win this one. Social media was all about this game at the time because of how close and competitive it was. The Astros scored another two runs and the Dodgers had a chance to tie it up, but the Dodgers were only able to come away with a single run, allowing the Astros to win game 2 by a score of 7-6.

This game was in Houston, and the Astros have been undefeated at home in the postseason. Houston was going into game three with full confidence that they could win this world series. Their offense went off again with twelve hits to the Dodgers four. There was some controversy after the Astros’ Gurriel hit a home run against the Dodgers starting pitcher Yu Darvish. Earlier in the season, Gurriel had mocked Darvish’s nationality and was suspended for a couple games. The Astros ended up winning 5-3 despite most people saying that the Dodgers were going to win this game. Many Dodgers fans were stunned that their team was down 2-1 in the series.

It all took a turn, though, as in game four, the Dodgers shut down the Astros’ offense with the Dodgers having seven hits to the Astros’ two hits. This game truly went to the wire. The Dodgers had momentum when Cody Bellinger, the Dodgers’ first baseman, hit a tying home run in the seventh inning after being down 1-0. The Dodgers offense played very well and only left one player on base for the entire game. The Dodgers put in five runs in the top of the ninth and the Astros fell to the Dodgers 6-2 with the series now tied 2-2.

This fifth game is considered one of the greatest world series games of all time. In the end, the teams ended the game with 14 hits and scored extraordinarily high. The pitchers from both teams were struggling and both teams had to go deep in their bullpen to pull out a wide array of pitchers because of the huge amount of runs that were hit. Both teams hit a combined 7 home runs in game 5, and the game also went into extra innings, tied at 12-12. Alex Bregman was the hero for the Astros in game five because of his walk off single that won the Astros the game by a score of 13-12. This win gave the Astros a lot of momentum going into Game 6 and set them up for their final victory.

This game was a big game for the Dodgers because a loss would mean elimination from the World Series, but they were determined not to go home. Likewise, the Astros had a weight on their head because a loss here would mean forcing a game seven, and if it were to go to game seven, it would be the first ever game seven in Dodgers stadium. Verlander started for the Astros, which was a very big advantage for them because of how well he did this whole postseason. The Dodgers ended up winning this game by getting many hits off of Verlander. This was very important because many teams haven’t been able to stop Verlander. The Dodgers brought this series to a very anticipated game 7.

A game seven was predicted by many sports analysts to happen because many people thought these teams were very even going into the World Series. The Houston Astros got a huge lead, going into the third inning with a 5-0 lead. This was because of Yu Darvish of the Dodgers poor performance and letting some mistakes slip, resulting in runs. Unable to get up, the Dodgers were able to get only one run back for the entire game. The final score was an anticlimactic 5-1 and the Houston Astros won their first world series ever. This was an especially big win for the city of Houston as after the tragic hurricane that hit them earlier this year, it boosted morale . This game wasn’t as good or dramatic as people thought compared to the other games in the series, but it concluded one of the craziest baseball series ever that kept all of the fans on their feet.